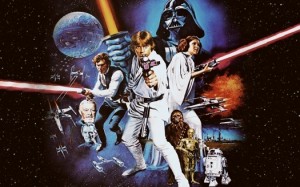 This list is my reply to Jayce’s list, and represents a totally non-objective view of the movies. This is not based on the merit of their acting, production, directing, etc. but solely on how I perceived them at the time and their impact on me. I present them chronologically so the narrative will make a little more sense, with the ranking listed after my comments.

A New Hope: I was 10 years old. It blew me away. I read the novel, got the album, bought the action figures, collected the bubble gum cards, read the novel, listened to the audio drama LP, read the novel, watched the…Holiday Special, bought some of the comics, read the novel, and cut out and saved the classic Russ Manning comic strip. I even read the novel. This was the defining event of my youth. For the next three years I was the Star Wars Guy. RANK #1

Empire Strikes Back: A cliffhanger? I didn’t want to be cliff-hung, I wanted the team to be challenged, take it to the next level, then knock it out of the ballpark in the last movie. This was a let down for me, as I had no real grasp of how a larger story needed to play out on the screen, and I guess I was just expecting so much more after the disappointing Holiday Special, but having my appetite whetted by Mark Hamill’s epic Muppet Show appearance months before. And, for a 13-year-old just starting to discover girls, Princess Leia in her Hoth outfit wasn’t a big enough draw to keep my attention. RANK #5

Return of the Jedi: I was 16. This movie, to me at the time, was simply running out the clock on the whole Star Wars thing for me, at the time. Yeah, I read the novel (I even got it before the movie came out), but other than that it was just another movie to see in a year of blockbusters (Staying Alive? Superman III? Koyaanisqatsi: Life Out of Balance? Cinematic masterpieces!). But my teenage life was otherwise in turmoil, and so the ewok-fest did little to preserve the flame that had been guttering since Empire. RANK #4

INTERLUDE: Between the two series, my enjoyment and appreciation of the films grew, in no small part due to the non-canonical comic books from Dark Horse as well as the novels detailing the continuing adventures of Luke and company and the annotated script book. So much so that I regained that pre-Empire sense of wonder I felt for the films, mythos and even the merchandising. Few birthdays or Christmases went by without a Star Wars themed gift or card, and I spent many long hours honing my Star Wars collectible card game deck to a formidable stack of cardboard, ink and plastic. Yeah, that’s right, I had two -TWO! – Admiral Mottis in that deck! What are you gonna do when the MADNESS meets the MANIA?! Oh, by the way, I was the Star Wars Guy again.

Phantom Menace: Star Wars back on their screen after 15 years! Sort of! It actually took me 3 viewings (all during my honeymoon, after a Star Wars themed wedding rehearsal party that ALMOST included a bachelor party private viewing of A New Hope on the big screen -but that’s a different story) to realize that Lucas made the movie for 7-10 year olds, which put the whole Jar-Jar thing into perspective for me early on, but made me wonder why he would add so much political stuff…do kids like that? But that notwithstanding, this led to the first Clone Wars cartoons, which only primed the pump for what was coming next. RANK #3

Attack of the Clones: In the immortal words of the Kool Aid Man, “Oh, yeah!” After the political intrigue and origin stories of Phantom Menace, this was what I had really been waiting 2 decades to see. Action packed adventure, jedi action (including Yoda fighting Christopher Lee!), clones, clones, clones, and the Fetts. Even the growing love story was nice, remembering that this was experienced years before the romance took horribly ridiculous turns in Revenge of the Sith. And Anakin beginning his descent into the maelstrom was the icing on the cake. You could just taste how sweet the next movie would be! RANK #2

Revenge of the Sith: After waiting for 25 years to see Lucas pull together all the subtle clues he planted in the original trilogy, watching him have filmnesia concerning his own creation was painful (hey, George, why not have the twins born on Dagobah, so when Luke says in Empire that he feels like he has been there before it actually MEANS SOMETHING instead of just being a throwaway line!). Worse was the logic that he presented concerning the Jedi and how they could miss the meaning behind the prophecy of the one who would bring balance to the force. These things (among a few others) set the entire series into the realm of nonsense for me, and totally recast all my previous attitudes towards the series. I had been a huge fan for so long. This is the movie that changed all that. RANK #6

For me, the proverbial circle was now indeed complete, although in this case I think the circle is more properly recognized as being a zero.