You are here: Home › Online Sci-Fi and Fantasy › THE BOOTH AT THE END (series review)

THE BOOTH AT THE END 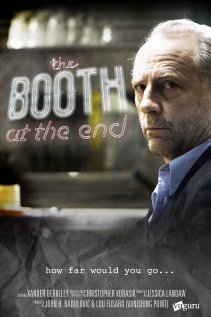 I’m watching the latest episode (episode four of season two) of what has turned out to be my new favorite speculative fiction TV show. But it’s not on TV. And probably never will be. No network is there to cancel it in the middle of the season. And because of that, it has a lower budget and a longer time between seasons, but it still manages to maintain a high production value by using tricks TV sitcoms have used for ages and using actors who are bringing their a-game to the table.

In this case, they’re bringing it, literally, to a table. The table in The Booth at the End.

The series takes place entirely in a single location – a diner in season one, and a different diner in season two. I think of it like this: “What if Lost and Cheers had a child who grew up and instead of going into the television business like her parents, went to create a career off broadway?” It has the single location of Cheers, the intertwining characters and fantasy elements of Lost, and the staging and acting of a well produced stage play.

Oh, and it’s free. Yes, it’s on Hulu, and I think even produced by Hulu, but it’s not a part of the Hulu Plus thing. So that does mean ads, but it’s really, really good.

It asks big questions, too. Like how far are you willing to go to get what you want? Would you take a life if it meant you could save the life of your child? Would you sacrifice to make someone you care about happy? These questions come up because the premise of the show is that people come to a diner in a big city to speak to “the man in the booth” – the booth at the end the title comes from – where they ask him for their heart’s desire. He doesn’t seem to have any power himself, but he does have a notebook he writes in as he takes notes on the human condition or something as he talks to the people who come to him, and he looks into the book to get the answers the people seek. “If you want your child to be healed, you must hurt three people.” That’s the sort of thing. It’s up to them if they do it or not.

The first season felt disjointed at first, as we hoped around from one person to another in seemingly unrelated plotlines. In fact, while I first watched it I wondered why the five or six different people who came to the man weren’t just featured in their own episodes. Then relationships were exposed and connections were unveiled and by the end (it’s five half hour episodes), the whole thing was wrapped up in a nice, tight narrative. The second season picked up two threads from the first and added a few more, exploring what’s behind the man in the booth without taking too much away from the mystery.

Highly recommended. The mystery and the ideas explored make it intriguing in spite of the limited budget and setting. Season one is on Hulu in its entirety. Season two currently has four episodes up.

You can watch it here: THE BOOTH AT THE END

Have you been watching The Booth at the End? What do you think?

The other two blog posts in this series can be read here:  Part two, Electric City. Part three, H+.