You are here: Home › Christmas › THE CHRONICLES OF NARNIA: THE LION, THE WITCH, AND THE WARDROBE — Strange Christmas Movies #7 (of 24) 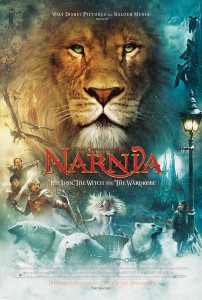 #7 — The Chronicles of Narnia: The Lion, the Witch, and the Wardrobe

What it’s supposed to be: The first in C.S. Lewis’ classic fantasy series, the story of four children who find themselves transported to a magic land where an evil witch rules, causing it to be always winter and never Christmas. But . . . Aslan is on the move!

Why it’s a Christmas movie: This one requires no stretching whatsoever! While the White Witch rules, it is always winter and never Christmas! But when Aslan is on the move, with his coming also comes Father Christmas! The three Pevensie children who actually do as they should are given special Christmas gifts straight from Father Christmas’ sleigh!

Thoughts: Really, what else needs to be said?

The Lion, the Witch, and the Wardrobe embodies the Gospels. We do not get the literal birth of Aslan, the Christ figure, but we do get a metaphorical one, as Aslan’s coming is heralded by the arrival of Father Christmas.

And then, toward the end of the story we are given Aslan’s Passion. Crucifixion and resurrection are shown to us, as we also see the forgiveness and redemption of Edmund, the one Pevensie child NOT present for Father Christmas’ presents.

A better adaptation COULD have been made, but this is what we ended up getting and, frankly, it’s pretty good! As a fan of C.S. Lewis and as a fan of Narnia, I was pleased with the results.

And let’s face it: of ALL the movies from this blog series, this one the most Christmas-y.

Next: On Her Majesty’s Secret Service