You are here: Home › Christmas › THE DAY MARS INVADED EARTH — Strange Christmas Movies Round Two (#34 of 48) 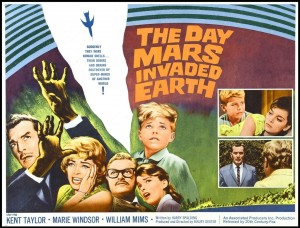 What it’s supposed to be: A sci-fi 60’s epic with a title that manages to evoke War of the Worlds, Invasion of the Body Snatchers, The Day the Earth Stood Still, and Invaders from Mars, telling the story of a quiet invasion of Martians.

Why it’s a Christmas movie: The movie opens on Mars, as an unmanned probe (looking surprisingly like something we could’ve sent recently) sends a signal to Earth that affects a scientist in Florida. He returns home to his family in California in time for Christmas, but it’s not a joyous family occasion. He’s out of touch with his family, thinking he had just gone camping with his son a year ago when it was four years ago in truth. Things are tense and awkward when he opens his presents early because he’ll have to return. And then there’s the strange situation of people who are acting weird and showing up in two places at once…

Thoughts: There are two original things about this movie: 1. The family dynamic, exploring separation of spouses and adding a metaphorical element to the idea that people don’t know each other anymore after they’ve grown apart from each other. 2. The way it pretty much just steals from a bunch of other sci-fi movies of the period.

Is It Naughty or Nice? I can’t see myself recommending people run out to see this movie, but if you like this sort of thing or if it comes on late night TV and you’re flipping channels, it’s not as bad as it could be.