THE MOTHMAN PROPHECIES — Strange Christmas Movies Round Two (#32 of 48) 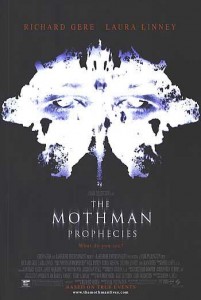 What it’s supposed to be: Based on a true story about a town that is experiencing strange occurrences, including seeing a “moth man”, which are essentially harbingers of disasters to come.

Why it’s a Christmas movie: This movie’s climax is set at Christmas and the “prophecies” of the title point to the climax, along with imagery of Christmas gifts floating in water.

Thoughts: For years I remembered Kevin Costner in this movie. And coming back to it for this series, well, Richard Gere? Did not remember him playing the lead.

What DID I remember? Well, the dream that prophesied the disaster at the climax. The imagery of the floating gifts was so weird, until you realized it was setting a ticking time bomb. Something bad was going to happen, and it had to do with Christmas day (or thereabouts). Then when everything happens at the end, it all comes together, and again the imagery on the screen is haunting and stuck with me until this very day.

Is It Naughty or Nice? But with all that said, this movie was pretty forgettable. The “true” story is far more fascinating, and if you’re going to fictionalize it anyway and change the ending and add things in, WHY NOT ADD IN MORE MOTHMAN CREATURE??? It strikes a decent tone, and asks questions about fate and destiny and the supernatural, but does so in a clunky way. So, if I have to judge (and i do, considering I’m the one who created this format) i judge The Mothman Prophecies…