For this installment, I totally cheat. First, this is not a “movie” that appeared in theaters. Second, it is totally MEANT to be a holiday special.

But I don’t care! I’m allowed to cheat every once in a while, right? 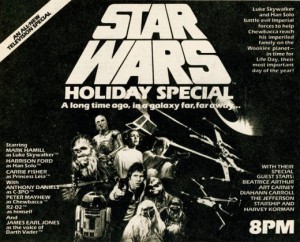 What it’s supposed to be: A cash in on the unprecedented and unexpected Star Wars mania, featuring characters from the movie, expanding the Star Wars universe and introducing a new character!

Why it’s a Christmas movie: The title: “holiday special”. It was released around Christmas. It has trees. They celebrate “Life Day,” a thinly veiled Christmas, because since Star Wars takes place a long time ago, it all probably happened before Christ was born. Although, what if Life Day is a pagan celebration pointing to the coming of a Messiah in a galaxy far, far away? This COULD be a meditation on the meaning of Christmas to a pre-Christ culture of alien life! Think of the theological implications! On second thought, don’t. No one else did, especially the writers!

Let’s face it, I cheated.

Thoughts: I saw this on TV when it first came out. I was a nut for Star Wars and I had to see it. And as a kid, it was awesome to see Chewie’s family and Boba Fett and Luke and Leia and Han together again (sort of) and Storm Troopers!

My memories of seeing it on TV are fuzzy, now, though. For years, all I remembered was Princess Leia singing and Chewbacca’s son walking on a railing high above the forest floor and storm troopers falling.

But I did, finally, get my hands on a bootleg after I was married in the min-nineties.

Oh, man, this was a stinker! This was not so much a Star Wars special as a variety show. Which, if you think about it, that sounds about right if you are doing a Christmas special in the 70s. It was written by variety show writers, it featured songs and comedians and actors who were working on TV during that time.

I just wonder at what point in the production process George Lucas said, “I’ve got a bad feeling about this.”

Let’s be fair. I believe with some heavy editing, this TV special COULD be a serviceable Star Wars TV show. The story of Chewbacca trying to get home to his family to celebrate Life Day, but they are in danger because of Chewie’s connection with the empire. I like 70’s sci-fi, and with some judicious cutting of musical numbers and comedy routines, this would fit well with the Logan’s Run or Planet of the Apes TV shows.

And then there is he Boba Fett cartoon, which also stands on its own as a decent story. I love the stylized animation by the Canadian production company Nelvana.

Someday, I may do a fan edit of this thing to see if it’s possible. But as it stands, it is a cautionary tale of everything that is wrong with the way corporate America commercializes ideas and commercializes Christmas.