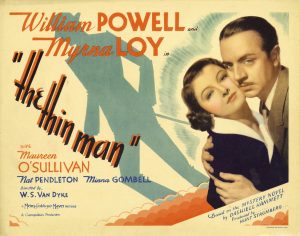 What it’s supposed to be: A murder mystery (or three), a societal farce, a slapstick comedy, and a twist on the classic noir movie.

Thoughts: There’s a witty wink and nudge throughout this movie and more than once you almost expect the characters to look at the camera and wink. They don’t. They come close, but they don’t. The married couple at the center of the movie trade witticisms and drink martinis and you almost get the impression they are just looking for something, anything, to give them some meaning in life. But they have each other, and they’re true to each other. They search for meaning together.

But if this is a Christmas movie, it’s of the Grinch variety. In fact, Nora says she’ll kill the next person who says “merry Christmas” at one point.

The movie drips with style. The actors snap their lines back and forth. The noir elements are used to full effect, including a character who casts a long, metaphorical shadow that is shown on the screen as a literal shadow. And Nick and Nora seem to float through life until a crime engages them and suddenly they sober up.