In this installment, I asked guest writer Daniel Butcher (who created and writes the Between Disney blog) to write about a classic Disney movie. A movie that is also, of course, a strange Christmas movie. 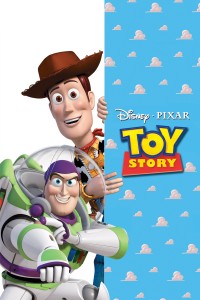 What it’s supposed to be: 1995’s Toy Story was intended to be the first animated theatrical release from a hardware/software company which has been sold by movie giant George Lucas to technology giant Steve Jobs.  This company, Pixar, had made some successful (but not profitable) shorts in the past to “showcase” their products.  In order to limit risk and receive mentorship the young studio’s film was shepherded and distributed by the Walt Disney Pictures, not that they know anything about animation!  So of course with almost everything against Pixar’s little film, it became an instant classic.

Why it’s a Christmas movie: The events of Toy Story are bookended by two gift giving events.  The first, Andy’s birthday sees the arrival of Buzz Lightyear and the power struggle between cowboy and space toys.  The second, gift giving exchange occurs on Christmas Day.  The gift of most prominence definitely shifts the power within the toy community, Mrs. Potato Head.  Now that is a movie filled with drama, if they ever chose to produce it.

Thoughts: Classic!  Toy Story is simply a classic.  And if you have not seen it, well stop reading now and treat yourself.  We will still be here when you get back!

Now you know the basic plot is that cowboy toy Woody (Tom Hanks) is the ringleader of Andy’s toys.  When space toy Buzz Lightyear (Tim Allen) is given to Andy for his birthday the two start a power struggle that results in Buzz being sent out the window of Andy’s room.  The ostracized Woody, accused of trying to kill the space toy, seeks out Buzz and tried to bring him home before the big family move.  In the quest home the pair shows up at the neighbor’s house, Sid, a toy torture chamber.  Can the two become friends?  Will the two get home before the move?  Does Mrs. Nesbitt want more tea?  The plot, with a screenplay credit by the Marvel Cinematic Universe’s own Joss Whedon, answers all these questions and more.

The movie is of course a classic, did I mention that?  But it is also a key moment in animation history.  First, it showed that Computer Graphics could be used for convey a compelling and interesting story.  Computer animators had moved a long way away from the backgrounds of Tron and Luke Skywalker’s X-Wings display.  The key at this point, honestly, was to tell a story without people and all their flexible features.  Eventually Pixar would crack the people code with The Incredibles and continue to improve it with movies like Brave.  Second, the movie established John Lasseter as a storyteller.  Though using the Pixar method of heavy rewrite, Lasseter learned a number of story lessons from his Disney mentors.  And finally, the small Pixar overnight became an animation powerhouse.  The movies that followed like Finding Nemo and Monsters Inc. setup a string of Pixar financial and critical successes.   In a contract negotiation, the relationship between Disney and Pixar soured.  And one of the first critical decisions of current Disney President Bob Iger was to mend the relationship and purchase Pixar in 2006.  This union of the two animation houses has resulted in the Pixar influence being put into films like Wreck-It-Ralph under Pixar and Disney Chief Creative Officer Lasseter.

Is It Naughty or Nice? Woody can be kind of a jerk.  He does attempt to send his rival to the toy version of sleeping with the fishes, stuck behind the dresser!  And Buzz seems to have a big head.  But then he really does not realize that he is in fact a toy.  For both adults and kids the movie has lessons about teamwork, friendship and kindness.  And most importantly it teaches us all to play nice with our toys.  Seriously, you never know which of your toys will have future collectable value!

Next: I Am Legend

Daniel Butcher is a Disney fan who awaits the Mouse buying the Chicago Cubs so all things he loves (beyond his family) all are controlled by one company.  Daniel was formerly the “other guy” on the Sci-Fi Christian.  Daniel blogs about Disney atwww.BetweenDisney.com and writes and podcasts with Ben Avery about Marvel’s Agents of S.H.I.E.L.D. and the Marvel Cinematic Universe at www.WelcomeToLevelSeven.com.