It could be worse. The “destroyed earth” movie you star in COULD have been Battlefield Earth, Tom . . . 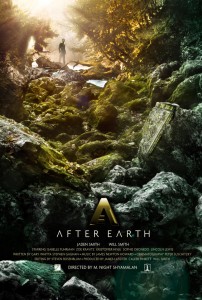 To be fair, Will is in the OTHER poster, but this one feels more like Tom’s poster.

Oblivion is April 2012. After Earth is June 2013. It’s Tom Cruise vs. Will Smith in the battle of the “dead earth except not quite so dead considering the people we see in the trailers” movies!

No matter who wins . . . earth has already lost. Is this a reaction to the end of the world vibe we’ve had lately? It’s inevitable, these movies seem to be saying. Earth is doomed, except for a few beautiful people with dirt smudged on their faces.