You are here: Home › Commentary › WHO REVIEW: Cold War 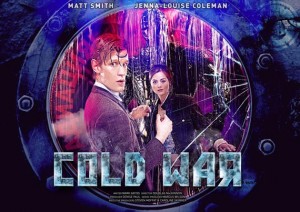 Spoilers ahead! Heavily! And not labelled!

Initial Thoughts: I liked this episode. I did. I need to say this because everything else I say after this will probably make it seem like I did not. But I did.

That said, this season is on a downward spiral. After another episode or two continuing on this trajectory, I will stop enjoying things.

Cold War was a good diversion. A decent episode. But there wasn’t the magic of the Doctor Who series I came to love.

In this episode, here is the set up: think Alien . . . on a submarine . . . and then it becomes E.T.: The Extra-Terrestrial. I love Alien. I love E.T. If I want to watch them, I’ll watch them. This episode felt derivative at best.

The alien was cool, though. The alien design was cool. When the alien wasn’t acting like a Xenomorph and hiding in the ship to pick off crew members, the things happening with the alien’s plot was interesting. But predictable.

Amused Thoughts: There are plenty of lines in this episode that are meant to be funny. They just aren’t very funny. I found myself laughing at things I should not have been laughing it. Especially the climax.

Deep Thoughts: The big ideas in this episode pretty much boil down to “be nice to your enemies.” “Don’t shoot at aliens on a submarine because they will try to destroy you?” I’ll be honest: Mike Poteet over at The Sci-Fi Christian has some better thoughts than I do about the big themes and ideas. There’s some ideas about “mutually assured destruction” that can be drawn from this, I guess. The episode could be looked at as a metaphor for the actual Cold War. The Russians representing one side, the alien representing the other side, and Clara and the Doctor representing the other, smaller powers who were caught in between. Maybe. It’s a stretch.

Confused Thoughts: Why did the TARDIS disappear? What was that silly reason he gave? Was that supposed to make sense? It didn’t make sense to me.

Bemused Thoughts: This episode was infected with a the disease of “Smart-People-Doing-Stupid-Things-Because-the-Plot-Requires-It”.

#1 — The sailor who decides to melt the ice. Why? “Life is too short” he says, to wait and see the fossil they found in some ice. (Clearly man shaped, but twice they say they thought it was a mammoth. Wha?) So this soldier goes against orders, lights a welding torch, and decides to melt the ice? This happens in the teaser. I thought to myself, “I’ll give them that, because I they need to get this thing out of ice to have a great episode.”

#2 — The Doctor. He essentially programmed the TARDIS to disappear when it is needed most. To protect itself. With no retrieval plan. He can detect it, but can’t retrieve it. The Doctor may be distracted, but he’s not an idiot.

#3 — The alien. Or his brothers. The alien can SEND a message for help, but does not receive an answer. There are a couple possible reasons: 1. they are all dead (which is what he believes); 2. they answered and his receiver was broken (wouldn’t he know that it was broken, considering everything seems to work via mental connection?); or 3. they didn’t answer him and just let him sweat it out while he waited, hoping they were on their way (which is what they DID, and it only makes sense in one context: so the story can end the way it does). So either HE or his fellow MARTIANS are not too smart when it comes to communication.

#4 — The soldier who fires his weapon in a submarine at a creature that is clearly wearing armor. This may be a natural reaction, but it’s not smart.

#5 — Clara. At first, she felt like a good, strong character. But she turned into “damsel in distress” toward the end.

#6 — The Russian Captain. He’s really going to just “give the Doctor a lift” to the South Pole? That’s a sitcom ending!

Final Thoughts: Ugh. That ending! Maybe I didn’t like this episode. Yeah, I guess not.

One Response to "WHO REVIEW: Cold War"