WHO REVIEW: The Bells of Saint John 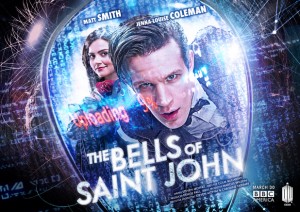 Spoilers ahead, they are labelled but they are not hidden . . .

Initial Thoughts: An exciting and fun midseason opener. Worth the price of admission. Everything I’ve come to like about Matt Smith and Stephen Moffatt.

Amused Thoughts: The motorcycle steals the show. Every scene it is used in is perfect Matt Smith Doctor Who. The turnaround with the WIFI hub at the end was a surprising turn of events. I did not see it coming and the reveal was delicious. Also, the titular bells? Beautiful!

Deep Thoughts: This episode of Doctor Who is a classic sci-fi play on modern fears. Yes, stealing souls through WIFI is ridiculous, but only a bit. This is about stealing lives and stealing identities and creating new personalities, not in the “identity theft” sense, but in the way that the constant connection of modern life steals your identity. With Facebook. Twitter, and the like, people create their own identity by shaping what they want people to see. And with the constant connectivity, people tend to lose sight of what’s going on right there in front of them. By being connected to the rest of the world, it is easy to disconnect from the world around us. Like good sci-fi, we are presented not just with a “what if?” but with a metaphorical picture of “now.”

SPOILER: At the end when the people come stumbling out of their brainwashed state in a stupor of lost time and identity, I was reminded of two things: the time loss I sometimes suffer when I’m online (did it really just take me fifteen minutes to find a synonym for “procrastinate”?), which I know is something that doesn’t just happen to me! And I was also reminded of the image from the book of James:

Do not merely listen to the word, and so deceive yourselves. Do what it says. Anyone who listens to the word but does not do what it says is like someone who looks at his face in a mirror and, after looking at himself, goes away and immediately forgets what he looks like.

Confused Thoughts: Still can’t figure out how Clara Oswald and her relationship with the Doctor works. I expect that’s intended, but I hope we don’t have to wait until the end of the season or, worse, the anniversary special!

Bemused Thoughts: I had a couple problems with the plot, though.

1st: Leaps of knowledge — the Doctor knows a couple things that were supposed to be told to him, but never were. One he could have found out, I guess (the location of the offices) but the other (who the second in command was, and that there was an obedience slider on the mind control app) was magical knowledge. There was no indication for any of that, especially considering he wasn’t even actually in the room!

2nd: The Great Intelligence took over those people, overwriting their personalities, and let them build new identities outside the “office”? Why would mind controlled drones be allowed to create Facebook accounts with actual information about where they work? Why bother rewriting them, just to let them build new lives that compromise the operation anyway?

Final Thoughts: Best episode this half of the season! Seriously, it was a good stand alone episode, but did not do much for the mystery they are building. So I’m disappointed because I want to know more, but overall I enjoyed myself.

3 responses to “WHO REVIEW: The Bells of Saint John”