Why Is Breaking Bad So Freaking Good? 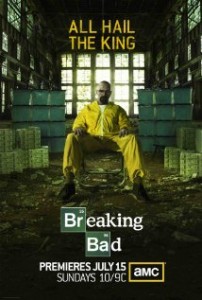 Breaking Bad is an interesting show. I’d heard many people talking about it, many of them fans of speculative/imaginative fiction, but it wasn’t until it made it to Netflix that I managed to watch it. And once I started watching, I was enthralled.

But why? What is so engrossing about this show?

Well, there are some easy surface answers I can give. The acting is sensational. The writing is super. The creative craft is cinematic. It is a well made, powerful piece of television.

The story is about Walter White, a man diagnosed with lung cancer who starts cooking meth to make sure his family is taken care of. And that decision changes everything, setting Walter on a path to destruction.

But there is much going on beneath the surface, too. these characters are playing out situations that have relevance to the real world. I find it interesting that genre fans tend to be fans of the show, and I think this is because the things that we love about sci-fi and fantasy are in Breaking Bad. Horror. Villainy. Morality plays. Intricate plans and plots. Put a cape on Walter White and this show would rival anything Christopher Nolan has done. Put him on a space ship, and you’ve got a drama that rivals Babylon Five or Battlestar Galactica with its twists, turns, and growing and changing characters. Give him a sword, and his Machiavellian plotting rivals the many characters from A Game of Thrones. Drop him in a post-apocalyptic landscape with mindless drug addicted zombies, and it rivals Walking Dead. (Strike that. It wouldn’t rival Walking Dead, it already is better than Walking Dead. I’d even contend that it already IS a better zombie show than Walking Dead. More on that later . . .)

So here’s my take on why Breaking Bad is so freaking good . . .

Yes, there are no costumes. No super powers (unless you count crazy, dogged willpower . . . and a superhuman knack for chemistry, math, and analysis). But make no mistake, Breaking Bad is the story of the rise of a super villain. And, to a lesser degree, the rise of a couple other super villains. And to a slightly even more lesser degree, the rise of a super hero . . . maybe. We’ll see. It seems like a hero is rising to take down the super villain. Their stories mirror each other, anyway, so that is what I am expecting. An epic clash between the villain and the hero, as everyone else scatters. Maybe I’m overselling it.

But here’s one reason why I consider this a super villain, and not just a criminal. It’s the secret identity. Walter White, as he steps into this life of crime and secrets, must keep his actions secret. And as he does, building another identity. He even has a costume, of sorts. A single item of clothing that becomes symbolic of his choice as he wades out deeper into the evil quagmire that could consume him.

Far better than Walking Dead, this is a show about zombies and the people behind the zombie outbreak. The zombies are meth addicts, though, which makes them all the more terrifying. These zombies are from the real world. Real life. And, they are zombies, partially, because of the aforementioned supervillain.

Don’t get me wrong. When I say this is a rise of a super villain, I do not mean that it glorifies Walter White’s evil choices. Each choice that gets made has ripples that expand and affect the people around him. His family. His friends. His partners. His “victims.” And his self. I hope that this doesn’t become a Scarface (which was references recently in the show), which has become a “positive” symbol for wannabe gangsters. Exploring the consequences of what he is doing might, maybe, prevent that.

Regardless, beyond the consequences to the people around him, even as he rises, he sets himself up for a higher fall. I do not know if that fall will be into an utter loss of everything and complete brokenness, or if it will ultimately mean losing his life.

As he continues this spiral downward, I can’t help thinking of James 1:15: “Then, after desire has conceived, it gives birth to sin; and sin, when it is full-grown, gives birth to death.” Or, as Romans 6:23 says: “The wages of sin is death . . .”

However, that last one ends like this “. . . but the gift of God is eternal life through Jesus Christ his son.” Now, i don’t expect Walter white to suddenly find Jesus (although I can’t count how many times I’ve thought about the “Slater principle”, named after a friend of mine who used to say, when watching a movie, “These people would be so much better off if they just knew Jesus”), but a metaphorical salvation is possible.

And I hope that there is some sort of redemption for Walter White. The story of Christ is the story of redemption. “Therefore, if anyone is in Christ, he is a new creation; the old has gone, the new has come!” Our hope is that the vilest sin can be washed clean. However, spiritual redemption does not mean worldly consequences just fade away. And there’s a heap of consequences coming Walter’s way once the truth comes out. Truth is, the truth has been trickling out for a while now, and he’s been paying the consequences for it. But there are still debts to be paid . . . and his brother, who works for the DEA, has been on his trail since season 1 or 2. Of course, because of his secret identity, his brother doesn’t know.

So there is a reckoning coming. And I find myself watching, waiting for it to come; hoping that it will not end in utter tragedy, but expecting it to. But hope is rarely a theme found in Breaking Bad.

I won’t say Breaking Bad is the best show on television, but it’s pretty close. It is rough — there are adult situations, which are not too graphic, and lots of violence, which can be graphic. Each episode feels like a mini-movie and, as the seasons progress, it gets better and better.

And as the characters and their relationships change, I can’t help feeling bad for many of them. Some started sympathetic and made choices that caused that to be lost. Some looked like idiots in the beginning, but have grown into strong people. Some are just caught in a situation they can do nothing about. Some want out and are working toward that end. It’s powerful storytelling.

The layering of the storytelling, with lies being told, and certain people knowing the truth and others not knowing, and planning and plotting against each other, give an added thrill. Especially considering much of the time, they don’t even know who they are plotting against. However, even though the audience is ahead of the characters some of the time with knowledge, I rarely feel like I am ahead of the story. This latest season, especially, saw some events and choices that caught me by surprise.

It does have science. I mean, it’s not “laser guns” and “warp drive” science . . . it’s “cooking the purest meth” ever science. But that IS science. And there are secret labs.

Perhaps one thing that attracts fans of speculative fiction is that Walter White is one of us. He’s a chemistry teacher. He’s smart. He knows science. He’s more nerd than geek, but he’s a lot like us. But, like the best super villains, he believes he is the hero of his story, even as he wreaks havoc on the stories of everyone around him.

He started with the best of motives — what better motive than a love for his family? Again, this is like many of us. Who among us wouldn’t do what they have to do to protect and care for our family, especially our own children. But what he’s done, ultimately, will destroy his family (and as early as season one, already started to).

But, he’s also like us in that he makes one small concession, one little compromise of his morality. I’m reminded of the “sin spiral” as my pastor described it, and it is perfectly portrayed in this story. This doesn’t come from scripture, just from common sense: first, fascination with the idea; second, preoccupation with the idea, as you consider how it could happen, although you haven’t actually done it yet; third, action, as you actually break your moral compass, make the compromise (for whatever motivation) and commit the act; fourth, addiction and/or repercussion, when you either find yourself unable to stop doing it, or paying for what you have done, in a physical, spiritual, and/or psychological way; and fifth, destruction, when the payment for the wrong is exacted. This can happen quickly, as we face a brief window of temptation, or over a long period of time, as we allow ourselves to be in situations of temptation.

Funny, this sin spiral played out in Downton Abbey, too, although over a briefer period of time, and in a much gentler manner . . . but that’s another story for another time. (And yes, just as Breaking Bad is non-sci-fi science fiction, Downton Abbey is non-fantasy fantasy.) Maybe there’s something to this theme that makes it something we humans can relate to?

PS — I do recommend that if you do watch this series, somewhere in the middle, take a moment to watch the final episode of Malcolm in the Middle. You’ll understand why when you do . . . and you’ll see what I mean when I say I fully expected him to try to cook up a batch of blue meth.

2 responses to “Why Is Breaking Bad So Freaking Good?”