Why Write? (The Way of the Writer) 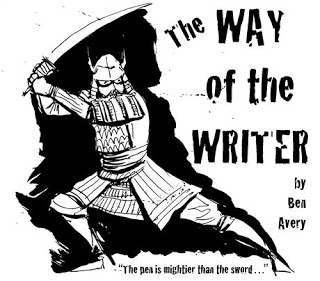 I’ve been spending a lot of time thinking about the “whys” in my life. Why do this, why do that, and why not this other thing?

And since writing is such a big part of my life, I have to tackle that question: why write?

And to be honest, it’s not as easy a question as it seems. This question is different than the question you often see in books and articles about writing. That question, while asked “why write?” is almost exclusively interpreted as “why DO YOU write?” And it’s usually answered with a “I write because I have to” or “I write because if I don’t I’ll go crazy” or some other bold statement about how writing is their destiny or their passion or their obsession. Nothing wrong with that, but that’s not the question I’m asking here.

My question is more along the lines of, “Why take the time to write?” or “What makes writing so important?”

Writing is not a solitary activity. While the act of creation may be, the end result is meant to be shared. And this gets to the beginnings of my answer: Why write? To share that writing with another soul.

Bringing us to another question: why do we want to share? The answer to that question is probably more difficult than the answer I’ve come up with. We want to share because we want to connect with other people.

(“Only connect” was a quote lifted from an E.M. Forster novel to be the mantra for a writing program I went to back in 2000.)

This is where the role of the writer becomes, to some degree, dangerous, though. Because once you make a connection with another human being, you are put in a position of power. What are you going to do with that connection? There is a great responsibility, and one that many writers seem not to take too seriously. Many readers as well. “It’s just a story” or “It’s just ink on paper” are often flippant remarks used when writers are asked to defend why they have written this or that — and these remarks greatly downplay the power of words, the power of story.

The power of connection.

There is a deep spirituality in even the worst works of art, because any art that has caused a reaction has done so because it has made a connection. I’m reminded of this exchange of an elderly couple from a Seinfeld episode, as they are looking at a painting of Kramer:

WOMAN: I sense great vulnerability. A man-child crying out for love. An innocent orphan in the post-modern world.
MAN: I see a parasite. A sexually depraved miscreant who is seeking only to gratify his basest and most immediate urges.
WOMAN: His struggle is man’s struggle. He lifts my spirit.
MAN: He is a loathesome, offensive brute. Yet I can’t look away.
WOMAN: He transcends time and space.
MAN: He sickens me.
WOMAN: I love it.
MAN: Me too.

The point being, when you create art, you’re hoping to make a connection, and unless it just gets tucked away in a folder or a drawer or a box, you will.

So, if that connection is why we’re doing it, are we actually thinking about the connection? 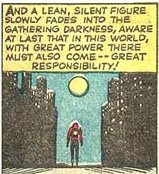 But there’s truth in that pithy comic book saying. The writer . . . the artist . . . the poet . . . I believe that, in light of the things I’ve just said, those people dedicated to making connections through art have been the most important people in society because of those connections. Because the artist has the power to cause people to think . . . to lift people up so they might see the face of God . . . and to bring people down that they might experience the depths of Hell. Yeah, I may be getting into a little hyperbole there, but only a little. There is a spirituality in art, something that transcends the merely physical. In many ways, to me, art and its powerful influence on humanity points to the presence of God.

I believe that being a writer — whether the greatest bestselling author or a self-publisher who sells four copies of their poetry ‘zine that they photocopied at Kinko’s — is, yes, a destiny, a passion, and an obsession because of this powerful connection between reader and writer. It’s different than any other relationship, because it is one way (usually): the writer creates a story or an essay, and the reader imbibes it.

Why write? To connect. Why connect? That’s the question that every writer should be asking as they write.

What do you think? Leave a comment below about your own ideas regarding the power and purpose of writing and art . . .

The Way of the Writer

2 responses to “Why Write? (The Way of the Writer)”