I love looking at the future through the lens of the past. I love looking at old Popular Mechanics and their visions of the future, and at old science fiction movies and how they expected the future to turn out. 2001: A Space Oddyssey and Space: 1999 are just two examples. Even Star Trek made a number of predictions that we have now passed.

When looking for the Spider-Man commercial for the video game art post last week, I stumbled upon this interesting video from the late 1960s, which envisioned something very close to the Internet and modern home computing.

Truth be told, I’d almost prefer to have that computer set up! That office LOOKS awesome!

And here’s the logical conclusion of the above setup, from an article called “Tuning in Tomorrow”, from Co-ed magazine (and reported about in IO9): 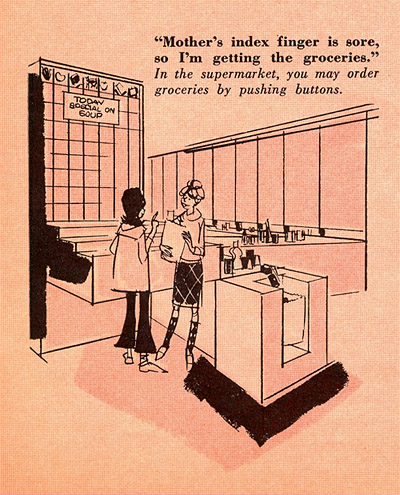 Wait, that’s actually not too far off from reality . . .