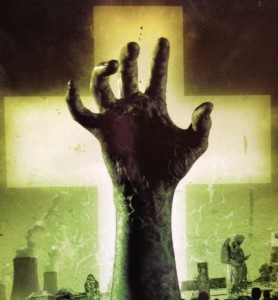 Zombies (both classic and modern, and if you don’t know the difference, please listen to our show) can be seen as types of blasphemies. Think about it for a second: the one thing God made in His image* becoming soulless and dead, but animated as if they were alive, in direct mockery of His creation. Hence, blasphemy.

I realize that there are many definitions of blasphemy, but the one that makes the most sense to me is offering up something as if it were holy when it is expressly NOT holy**; conversely, treating something that IS holy (especially something that is supposed to represent God, such as His Name) as if it were NOT holy would also be considered blasphemy here as well.

And I also realize that there are more than one way of looking at the “…in the image of God…” portion of the text. To cut to the chase, I am assuming that anyone who agrees with that in any way would agree that, to some extent, humanity is the image-bearer of God, and as such represents Him, at least in a small degree. I realize that I am arguing that we all commit blasphemy any time we do not adequately represent Him, which is probably all the time, but at the very least it can be said that Christians at least attempt to do this. In Hebrew, the word ‘image’ (צלם tselem) means ‘a shadow, an outline or representation of the original’.

So, back to the zombie metaphor, we have human beings (who are still, to whatever little degree we can, bearing God’s image by being alive and having a soul) and zombies***. To me, zombies are reanimated corpses, and not the actual person (soul) who once inhabited that shell, but that shell is still in the form of the shadow/outline/representation, at least in a very basic sense, and needs to be addressed so that the blasphemous nature will go away.

Similarly, with ‘classic’ zombies, we have normal human beings (us, or, typically, the hero/protagonist) and ‘zombies’ (who are mindless – not soulless- slaves, or thralls). In this case, the drugs, or magic, or whatever needs to be taken away so that the mockery of life – the blasphemy – can be returned to a productive (‘image-bearing’) life. The mind-robbing influence needs to be addressed so that the blasphemous nature will go away. One might rightly argue that this is the greater blasphemy; one person enthralling another against his will as compared to a disease or whatever causing the zombie blight.

From a story standpoint, the reader/viewer should now be shown one of two things: either how we should deal with blasphemy (correcting it and putting it in its proper place) or how the world reacts to it (devolving to a mindless level and creating further blasphemy by committing violent acts against the zombies). I would argue that Christians can find food for thought in the former story type, while the latter would produce cautionary tales at best.

** one example would be using “holy -”, and following it up with something that is obviously not holy…REPENT Boy Wonder!

*** ‘modern zombies’, who mimic life, but only by being animated, and whose soul should have passed on at the time of death, assuming that you read 2 Corinthians 5:8 – “We are confident, I say, and willing rather to be absent from the body, and to be present with the Lord.” – to mean that there is no intermediate state between life and death.

12 responses to “Zombies as Walking Blasphemies”