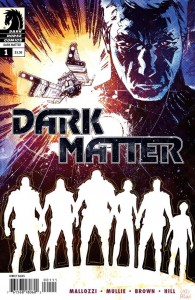 As you may probably know if you are familiar with the podcast, I write comic books.

I also read them.

If you’ve listened to the podcast, you also know I am a fan of the Stargate franchise. All of the series.

So, by proxy, that makes me a fan of Joseph Mallozi and Paul Mullie, writers from Stargate (Mallozi is also a producer), and made Dark Matter, his comic book from Dark Horse, a must buy for me. So I got the first issue. And, today, the second issue. And I will probably buy the third and fourth, simply to complete the series. i mean, I’m already halfway in.

First, the good. Mallozi and Mullie are talented writers. Gifted storytellers. And Dark Matter seems to have an interesting and intriguing high concept behind it. Essentially, a small group of people wake up on a starship with no memory of who they are or how they got there.

Second, the bad. Mallozi and Mullie are good television writers, and this feels like it was meant to be a TV episode. It doesn’t read like a comic. Granted, the second issue is better on that front.

The truth is, Dark Matter is intended to be a television series, according to Mallozi. The comic is adapted from their screenplay, from what I understand.

I do recommend it. It has a strong concept and strong visuals, and gets better as you read along. However, I would probably suggest waiting until it is collected into a trade paperback. As a pilot episode, I think part of the problem is instead of waiting through five minutes of commercials to get from the first to the second to the third to the fourth act, buying the individual issues requires to to wait four weeks!

UPDATE: The rest of the series has not changed my opinions of things. Although, the ending absolutely leaves me wanting more.