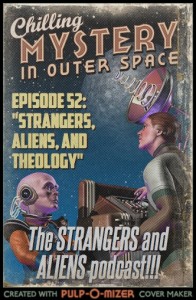 In this episode, the guys tackle some of the biggest questions in faith-based geekdom: is there life on other planets? And if so, what would it mean for Christian theology and Christians in general?

And how does Aslan fit into the conversation?

And what revelation did Ben have about E.T. that made him feel really, really stupid?

They also talking about “shipping,” the fan term for when you want to see relationships form in the show you are a fan of, and Dr. Jayce’s wife sort of makes an appearance as a fan of The X-Files. But is she a “shipper”? Find out!

And they talk about other podcasts! Including:

Storymen (http://www.storymen.us) — “The intersection of pop culture, theology, and history”

Faith, Hope, and Nerds (http://www.faithhopeandnerds.com) — “A light hearted yet serious look at being creative, being a Christian and, more often than not, being confused.”

The Sci-Fi Christian (http://thescifichristian.com) — “Theology at warp speed” (the episode we referenced is: Episode 125: The SFC Time Loop – Is the Existence of Aliens Compatible with a Biblical Worldview?)