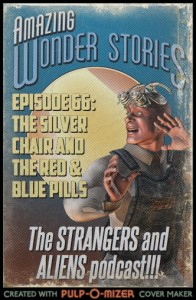 In this episode, Steve, Dr. Jayce, and Ben discuss The Silver Chair and its famous confrontation between the witch queen and Puddleglum, and the sci-fi and fantasy movies that reflect the idea of living in a world that is not reality. They also put on a couple dramatic presentations to do so.

This episode is part of the Strangers and Aliens Year of Lewis. The month of May is devoted to The Silver Chair and The Problem with Pain. You can discuss these books on our Goodreads book club: Our Goodreads group can be found here.

Next week is also the Christian geek podcast theme week. Check out these other podcasts, who will be taking part in the week!