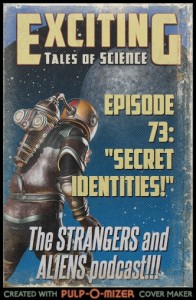 We’re back! And our topic: superhero secret identities! Are they necessary? Are they moral? Are they realistic? What’s our favorites? Plus LOTS of reader response!

This is a “lost” episode. It was recorded before Ben left to work at a camp for families affected by disabilities and then lost on his hard drive. But, it once was lost and now it is found! Our next new episode is about Man of Steel and we’d love to hear from you about it!