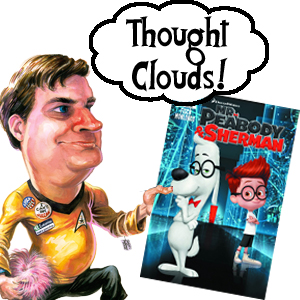 I have always enjoyed the exploits Mr. Peabody and his boy, Sherman. They are one of my earliest exposures to time travel, an area of sci-fi that I love. (My first published comic was a time travel story, and of course there is my own time travel graphic novel series, TimeFlyz, which the Mr. Peabody and Sherman cartoon was one inspiration of many.)

Here’s the set up: using the crudely animated, but charming style of Rocky and Bullwinkle. Sherman and Peabody go into the Wabac machine; hit up a popular time in history; things are not what we’d expect, usually a well known historical figure has a problem; and Peabody, being a super genius, solves the problem in a wacky way, ending the episode with a terrible pun.

The episodes are short — five minutes or so each — fitting in between some of the other segments from the Rocky and Bullwinkle show.

Like everything from my childhood and yours, they are being turned into a movie for modern children. And that means tie-in media products! And this being a comic book review column, that means comics!

So, while I have little to say about the upcoming movie, I have read the comics that make up this upcoming graphic novel. Does it fit in with the classic cartoon?

The bad puns? There. The messed up historical figures? There. The characterization of a genius dog who knows he’s the smartest “person” in the room? There.

But here’s the greatest test: my children liked what they read and wanted the next issue after they would read the current one.

There are four issues in the series, and each issue takes readers into a handful of historical settings. All four issues will be collected into one graphic novel.

For comic fans young and old who enjoy goofy humor, this is a fun series. There’s not a lot of thematic meat to chew on, and that’s just fine. Bring on the sugar coated fun!

And for fans of the original cartoons, this is a welcome trip down memory lane.

If the movie is anything like this, I think that we are in for a good time.

I’ve always believed that Peabody and Sherman were a GREAT all ages franchise that never quite had a chance to really live up to its potential. This comic series is a good step in that direction.

Stamped with the Strangers and Aliens Sci-Fi for Kids Seal of Approval!

The Mr. Peabody & Sherman graphic novel will be available at the end of February, and is currently available for pre-order. Your local comic shop may have all four back issues, too!