You are here: Home › Commentary › My Mount Rushmore of Sci-fi TV 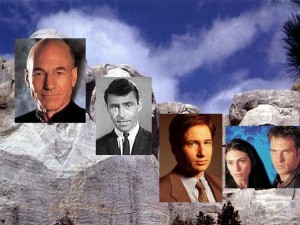 Star Trek:The Next Generation- Picard rocks my face off! The Borg is scary as all get out. Data kicks tail. Worf makes me laugh. And the Holodeck makes my imagination go into fits with so many possibilities!

Twilight Zone- So many movie plots have been bootlegged from TZ that Rod Serling should be getting a googolplex worth of residuals. Twilight Zone isn’t just one of the best Sci-fi shows ever…it’s in the running for best TV show period! Original, poignant, thought-provoking, and it’s moral probing heart is just…well I’m going to watch another episode right now!

X-Files- The closest thing to Twilight Zone since the Twilight Zone. It scores higher on the creepy radar, but comes in just short of TZ on the moral probing scale. I would say that the movies need to get better, but the TZ movie wasn’t too hot either!

Farscape- I nearly turned off the first episode of this underrated show. But I gave it a full showing and I was hooked. The fresh take on space travel was a nice reprieve from Trekkie world and the puppets were downright enjoyable.

Star Trek-The original, but not the best. No doubt that TNG built upon its stellar legacy, but in the end TNG proved the greater series with the better captain.

LOST-After seeing every episode, it is easy to concede, this show gave us some of the most memorable characters we’d ever seen. The first season was mind-blowing. The second season failed, but the third season got the show back on track. It was one twist and turn after another. It dealt with thought-provoking deep themes like good vs. evil, but the ending fell far short of expectations. Had it ended better this show would have been on my Mount Rushmore.

Quantum Leap– My favorite time traveling TV show. Great concept, but the ending here also tainted (just slightly) my overall view of the show. It was fun while it lasted. I hope they do a movie version soon!

SG1-Stargate SG1 was well on its way to my Mount Rushmore (and still just barely missed it), when Dean Anderson left the show. First he stops going on the “missions”, (which is where most of the action happens) and then he leaves the show altogether. Don’t get me wrong I still enjoyed the show when the Farscape crew came on board, but losing Jack O’Neil would be like losing Kirk or Picard. A show never fully recovers from such a loss.

Sliders– This show should have been on our “Cancelled Too Soon” podcast. It never got a fitting ending. I want a movie for this too!

Firefly– Everyone knows that Fox dropped the ball on this one! Serenity was a very fulfilling movie, but I’d love to see another!

9 Responses to "My Mount Rushmore of Sci-fi TV"