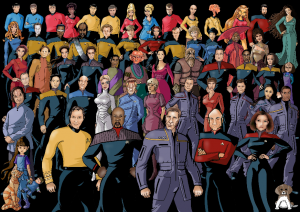 After watching every single episode of every single TREK series I decided to revisit this posting and revise anything that may have changed. See below with my new comments italicized.

If you are a Trekkie or married to one than you have heard the age-old debate: Kirk or Picard. Today I will add upon that debate by selecting my ELITE CREW. From Captain to Doctor I will pass along who I would prefer on my team.

1st Choice: Picard – He is the best Captain. He is diplomatic, but can throw down with the best of them. He is private but we feel that we know him better than we ever knew Kirk, because of his battle with the Borg.

Honorable Mention: Sisco – At first I didn’t like him if I were to be honest, but as the writing got better and as the stories on DS9 improved, Sisco’s awesome meter also grew. This also coincided with him shaving his head and growing his goatee. If I couldn’t have Picard, then I would love Sisco.

Last Choice – If we were playing basketball in the neighborhood and we were picking teams the last captain I would choose is Janeway. She’s not bad, but she had the worst series in the bunch, the worst crew, and the worst story lines…so due to guilt by association, Janeway loses.

After watching every episode all the way through my top captain would not change. Picard is still cream of the crop. However, from there anything goes. The biggest move is that Janeway got herself out of the seller. The reason…I can see Ben’s point, I would love for her to be my captain. She is caring and if she is going to do something stupid she will do it herself. However, Kirk on the other hand gets everyone else killed (i.e. Red Shirts). That being said I can’t put Kirk at the bottom, because basically Archer is Kirk all over again, but he is a copy and not the original…so as much as I like Mr. Quantum Leap, I’m going to have to place him at the bottom. 1. Picard 2. Sisco/Janeway tie 3. Kirk 4. Archer

1st Choice: Spock- I really wanted to ignore Spock to totally tick off Ben, but I just couldn’t. How can you pass up the Vulcan Knock you out without even blinking death grip.

Honorable Mention: Riker – He is cool. He’s kind of like Kirk, but with a beard.

Spock still tops this list. In fact the order pretty much stays the same, but I will say I actually liked Chakotay a LOT better than I did before I started this TREK of watching every episode. For a war criminal he really turns out to be the moral compass of the Voyager crew. In truth, I enjoyed Voyager far more than I thought I would (or than I remember).

1st Choice: Data – Under no circumstances would I NOT put Data on this list. I could put him anywhere, because he could do anything! He could be my doctor, security officer or my ensign if I so chose. He is invaluable.

2nd Choice: Tom Paris – I didn’t have a second choice before, but how can you not like Tom? He is a good-hearted rebel and he likes everything classic Earth culture. Plus he is an excellent pilot.

Last Choice: Kim – Like many of the Voyager crew he was hindered by the weakest of the Treks.

Kim isn’t even a Helmsman! That’s how much I remembered him. However, I will say that I (like much of Voyager) ended up liking him far more than I did before. In fact, two of the best episodes involve Harry Kim (Timeless & In the Blink of an eye). Plus he is basically the less annoying version of Wesley Crusher…the little brother that grows up.

1st Choice: The Doctor – He’s a hologram! He won’t die if you shoot him. His bed side manner is weak, but he knows all things medical. And you could download a program that would make him look like any of the other docs if you wanted him to look or sound differently! On Mondays and Fridays he looks like: McCoy…every hour on the hour he recites “He’s dead Jim”!

Honorable Mention: Phlox – If you don’t have the drugs and technology he could whip up something from the green fungus that grows underneath Wesley Crusher’s Gym bag…if indeed Wesley was on board.

Again, the top of the list stays the same, but the bottom gets a shake up! The basement is occupied by Dr. Crusher rather than Bashir. Mainly because if I had a crew of my own than I’d go with the one who is genetically built to be super human. I love Crusher as a friend to Picard, but Bashir’s unique skills get him out of last place.

1st Choice: Odo – The dude can shape shift. How do you get anything by him!?

Last Choice: The red shirted guys from TOS. Red shirt =’s death, so they weren’t very good at their job!

Odo still gets the top spot IF I get the original kick butt Odo. See from my point of view there are two Odo’s. The first one is the one who gets to the bottom of things no matter what. The second Odo does the same thing, but spends half of his time crying in the corner because he wants to return home to his people of goo. Odo’s character almost drove me crazy during the last few seasons of DS9. That being said, he’d still be my top choice. The only other comment I will make is that Tuvok would challenge both of my top two choices, but still comes in third.

1st Choice: Chief O’Brien – He’s fun, imperfect, and has a great underdog story. He went from acting extra to main character. He is one of the few married characters on Star Trek, so we got to know him in ways we never saw most of the others.

Honorable Mention: Trip – He is just downright cool. Had Enterprise gone on longer he may have topped this list. He is basically Enterprises’ McCoy/Scotty combo.

These selections are cemented in stone. Ben and Steve would argue for Scotty, but lets be honest…O’Brien is simply a better version of Scotty.

1st Choice: Seven of Nine –  She has the knowledge of thousands of alien races that Data and Spock have never heard of…WIN!

Honorable Mention: T’pol – She’s as smart as Spock, but yet a tad bit more edgy.

Seven would most definitely be my first pick. My last pick would be Dax. This would upset my brother greatly, but regardless, Seven is the best choice here.

1st Choice: Counselor Troi – She can read people’s emotions. This is very handy. Besides when you have a Vulcan, a Borg, an android, and a hologram on your crew you need some heart to go along with those brains.

Last Choice: Kes – Her ears were creepy and her relationship with Neelix was weird.

This is my biggest change, because as much as I disliked Kes before…I now know that she would be a VALUABLE crew member to my team. She is more powerful to Troi. I still think her relationship to Neelix and the ridiculous Seven year life span held this character back. Therefore Kes replaces Troi.

1st Choice: Worf – Quark is a fun character, but he’d cause trouble all the time. Wesley Crusher is extremely smart, but he’d bail out halfway through the mission. Worf did so many things that he is valuable anywhere. If I were going into hand to hand combat I’d want him on my side. And the crew could always rub his forehead for good luck.

Last Choice: Travis Mayweather – He is easily the most forgettable character in all of Trek history. This is not his fault. The writers just didn’t get around to expounding upon his background.

Mayweather and Kim were two characters I have always thought were throw-away characters, but now I have to remove Kim off that list. Mayweather on the other hand almost never got showcased. He was basically a glorified extra.