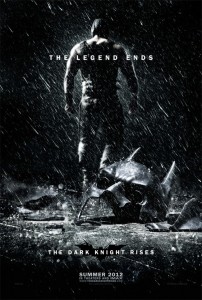 Well, after that Amazing Spider-Man poster (which I wrote about here), DC Comics has released their own new poster, for The Dark Knight Rises. Coming off two of the best superhero movies ever made, this one is playing up the opposite angle that the Spider-Man poster emphasized. Spider-Man is an origin story, promising the “untold’ story, but this one promises the end of a legend.

This rather excites me. I doubt they would be so brave . . . or bold . . . as to really END the legend, but I would love if this film was about the death of Batman. In comics, Bane (the big guy in the poster) breaks Batman’s back, putting him out of commission. Of course, he got better. So i expect this movie to take that route. But what if? What if they went there? Made this movie, the last Batman movie in this cycle of stories, the true “end” of the story, with his death? Then again, it’s called “The Dark Knight Rises”, so the title would seem to be about Batman getting a good beat down . . . and then rising.

What do you think of the poster? And are you looking forward to the movie? Can it possibly be as good as The Dark Knight?