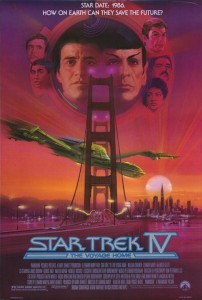 Captain Kirk, Mr. Spock, and Bones take off with the rest of the Original Star Trek crew to the past in order to bring back a humpback whale to save all humanity. If that isn’t a sci-fi premise then I don’t know what is.

Best part: Kirk and Spock riding a bus in 1986 and trying to figure out cultural norms of the 20th century is amusing, if not hilarious at times. This may be the most original plots of any Trek movie before or after its release.

Worst part: This answer is simple. It’s not even close. You’re telling me that the fate of the entire Earth depends on the language of the humpback whale? LOL! Wow, that is just way out there even for the Star Trek franchise. I mean why not have the Federation desperately in need of a chia pet or –God forbid- a mullet…or what about a movie that illustrates how Cyndi Lauper was the key catalyst for saving the planet!?

If it wasn’t for the brilliant dialogue and the fish out of water hilarity of the TOS cast tiptoeing around in 1986 this movie could have been laughable. But, for some CRAZY reason it worked. The movie was a bit preachy about saving whales, but the execution of the film carried the movie despite its political and random premise.

One Response to "RANKINGS: Top 10 Time Travel Movies of All Time (#9)"