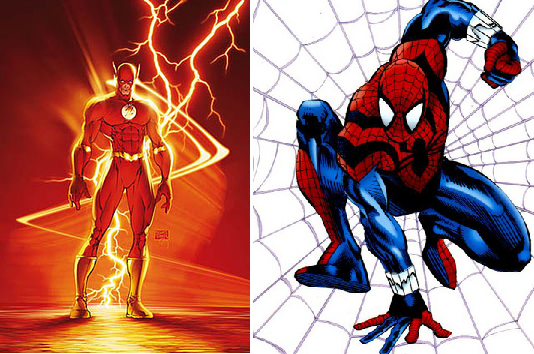 WHY? Spidey is quick but not Flash quick. Flash’s abilities are often underrated.

HOW DO YOU FEEL ABOUT THE OUTCOME? This one isn’t even close in my mind. Speed wins out and webs do no harm to the hero in red….I mean the other hero in red.

WHY? Not even a challenge. I mean, Flash’s super speed would trump any webs, spider-sense, and agility Spidey has. Sure, Spidey’s a genius, but he’s severely outmatched here.

HOW DO YOU FEEL ABOUT THE OUTCOME? The good news is that Spider-Man is ALWAYS outmatched! It’s part of his charm. If the fight happened in his own book, he’d lose the fight but some how the story would be satisfying.

This one comes down to “how fast is Spider-Man’s Spider Sense?” I envision Flash going easy on Spidey at first to try and overwhelm him, but Spidey getting airborne and into a good rhythm before Flash can make his coup de grace. Eventually, Flash gets webbed and slugged with Spidey’s super-strength before he can vibrate free.

This is actually a great match-up, as Flash’s powers and Spidey’s strength almost cancel each other out. But I think Spidey’s resourcefulness, ability to get in the air, and Spider Sense tip the scales before Flash would really know what he is up against.

Spidey is one of my favorite heroes ever, but if you’re asking if Super Heroes were real, who would win? That’s a no-brainer. Flash is the man. Webs would be too slow to land on him.