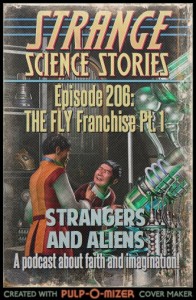 THE FLY was a smashing success in 1958 with its moody but bright cinematography and its effective twists and atomic age horror. The follow ups, RETURN OF THE FLY and CURSE OF THE FLY, weren’t as critically acclaimed but tried to creatively continue the story. Ben is joined by John Harju, a horror fan and aficionado, to talk about the original three movies in the FLY franchise.

Part two, our next episode, will cover the 80’s remake and it’s sequel.

3 responses to “Watching THE FLY Original Trilogy with John Harju: Part 1 of 2 – SA206”