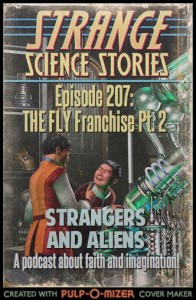 THE FLY was a 50’s horror/sci-fi classic, but in 1986 it was remade into another kind of horror movie with director by David Cronenberg. A sequel followed a few years later. Ben is joined by John Harju, a horror fan and aficionado, to talk about the new turn the THE FLY franchise took in the 80s.