It’s almost the anniversary of our first year of Strangers and Aliens! We wanted to do something to celebrate that would be fun, spread the word about the podcast, and give back a little to our listeners. So, we’re doing the . . . 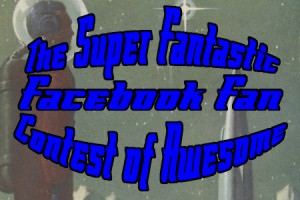 Everyone who has LIKED our Facebook page — facebook.com/strangersandaliens — is eligible to win, unless you live in the same house as a host or ARE a host. All you have to do is let us know on our Facebook page and you’ll be entered. (The best place to enter your name is on  the contest announcement here.)

However, this contest is also about getting the word out about the podcast. So, if you know someone who likes science fiction and/or fantasy and/or horror and/or comic books and/or other speculative fiction type things AND (not or here) also like Christianity and theology and that kind of thing (basically if you know someone who might enjoy the podcast) tell them about us. Ask them to like our page. If they like our page on Facebook, THEY are automatically entered into the contest. And here’s the best part — if they tell us who invited them, namely YOU — then YOU will be entered again!

So, how do you win? Well, you get entered by telling us via Facebook that you want to be entered . . . you get entered by LIKING us during the contest . . . and you get entered every time someone you’ve invited likes us . . . and then on the podcast, we will draw names from a hat. (Literally, a Superman baseball hat.) If we pull your name, we’ll get in contact with you through Facebook to get your address so we can send you your prize!

The Dr. Jayce Inspirational Book Prize Pack: One Minute Devotionals for Boys and No Girls Allowed Devotions for Boys.

The kid’s book prize pack: Dr. Jayce’s Crazy Circus World, Ben’s ArmorQuest volume one graphic novel, and getting yourself drawn in a story  Steve and his daughter’s Cookie Man and Doctor Pop.

So, like us on Facebook and get entered and then invite your friends who might be interested in Strangers and Aliens! Again, the best place to enter your name is on  the contest announcement here.

One response to “The Super Fantastic Facebook Fan Contest of Awesome!!!”