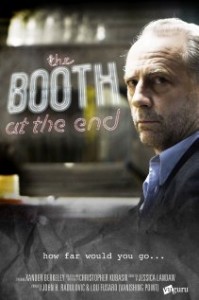 The Booth at the End is a thought provoking, dramatic speculative fiction series on Hulu.com (available as part of their free service). Ben has reviewed the series, and on getting in contact with the series creator and writer, C.K. Kubasik, was able to take some time to have a conversation with him for Strangers and Aliens.

Ben’s review can be found here: The Booth at the End. It was part of series of three reviews of sci-fi programming that were made for digital viewing, not for TV. (The other two series were Electric City and H+.)

If you are a listener of certain OTHER podcasts that have to do with sci-fi/fantasy and Christianity (you know the type of podcast I am referring to: the kind that “brings you theology at warp speed” or whatever) you may have already heard an interview with Mr. Kubasik. If you haven’t had a chance to listen to that episode, recorded after season one of The Booth, you should. It’s a fantastic interview (in spite of the fact that it’s done by S&A’s nemesis podcast). Here’s a link: The Sci-Fi Christian interview with C.K. Kubasik

If you are not familiar with the show, here is a teaser trailer for season one:

And a season two trailer:

Want to give us some feedback about this episode or The Booth at the End? Do you have another online sci-fi show we should be talking about? Let us know about it! E-mail us at podcast@strangersandaliens.com OR record a message using the handy recording tab on the right of our webpage OR send an MP3 of you and your comment OR contact us through Facebook or Twitter! We want to hear from you! (And we’d love to hear from you by actually, you know, HEARING your voice!)

Here is the link to Audible that we mentioned: http://audibletrial.com/strangers (Remember, signing up for a free one month trial, which gets you a free audio book that you can keep forever, ALSO helps Strangers and Aliens!)