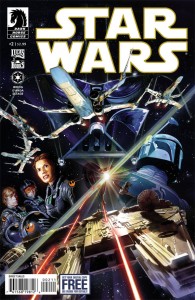 A follow up to my review of the first issue of this series . . .

Let me get this out of the way first, before I get into a rant that may make it seem like I’m not enjoying this comic book: I like this new Star Wars comic. Unless something really botches it up in the next issue, I will probably be following this series for at least this story arc. Other Dark Horse Star Wars comics have, usually, lost my attention. I’ll read a couple issues and get bored or confused or both (with a couple exceptions that I’ll revisit in future reviews). But this one has a lot going for it, much the same as the first issue (which you can read by clicking on the link above).

The art is fantastic in this series — stylistic, but recognizable.

The story is interesting, and it is fun to get back into the swing of things with some of the old friends. There are two moments in particular (both involving Han Solo, actually) where a character or a location from the films are used as minor surprises. (Hmmm, interesting, now that I think of it . . . both reveals are almost exactly the same! They both occur on a page turn, they both feature the Millennium Falcon flying away from us into the distance, and they both reveal an important element to THIS story that involves a well known element from Star Wars lore.)

But this series is testament to what is wrong with modern comics. Modern MONTHLY comics, I should say.

Very, very little happens. At the end of issue 2, we are still being introduced to new characters. New important characters. Maybe I’m supposed to know these characters from other Star Wars stories, but I don’t have that back knowledge, so suddenly these characters are thrust on me with dialogue explaining who they are and what they are there for, instead of learning about them through interactions or character actions. It has to be done this way, though, because of the way modern comics tell stories. Instead of clipping along at a fast pace, cramming each corner of the page with things happening, artwork is allowed to breath. Scenes that, in old school comics, would have been a single page, flow over five or six.

Do not get me wrong: this is NOT a bad thing. But it does mean when you buy this comic, you are getting a very small portion of a story. And then you have to wait a month for the next small portion. This modern style of storytelling works well in a collected graphic novel, where the whole story unfolds at this slower pace, but it doesn’t matter because you have it all.

So, with Star Wars #2, we have a comic where very little happens. What does happen is fun, and Han Solo is interesting because you can see little glimmers in him as he asks himself “what if . . . I left this life I’m living.” Leia finally shows some hesitation and actually acts like she’s new to this, something I had a problem with in the last issue.

It’s a good story, but I think the way I may end up reading it is by getting the collected edition or buying the issues and reading them all together when the story arc wraps up.

And to read some of the FIRST expanded Star Wars universe stories, you can get these collections of the old Marvel comic series . . . which cram so much space opera crazy into each page that this whole entire issue I just reviewed would probably only be four pages in one of these Marvel comics! An exaggeration, yes . . . but only slightly! (And remember, purchasing anything after clicking these links helps support Strangers and Aliens’ operating costs!)