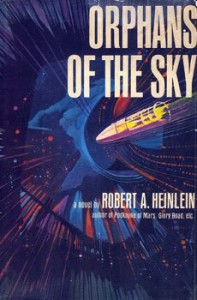 Over a year ago, Ben, Steve, and Dr. Jayce recorded an episode that they never released, mainly due to the audio quality of the recording. But it was a good episode. A good conversation. So it’s being released here and now.

This was an experimental episode, in that they played a recording of the old time radio sci-fi series X-Minus One, a classic series that featured stories by some of the giants of sci-fi!

The story is called “Universe” and is based on Robert Heinlein’s book Orphans of the Sky, one of the (if not THE) first uses of a generation ship in science fiction!

Listen to Universe with Ben, Steve, and Dr. Jayce and then give their conversation a listen. It’s a sort of blast into the past!

One response to “UNIVERSE by Robert Heinlein (OTR) (The Lost Episode) — Ep. 88”