WHO: Season 7 Off to a Running Start! 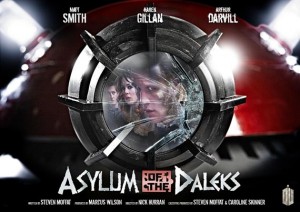 As of this writing, the first two episodes of Doctor Who’s seventh season have aired. Or, as in my case, downloaded. (Legally. I promise. I used iTunes to buy the season.) So, how has it been?

In a word, fantastic.

Both episodes require almost no previous knowledge of the show, but both are deeply satisfying if you do. Both have a lot of running and a lot of heart. And both have sci-fi concepts and interesting ideas, made more interesting because of engaging characters.

In “Asylum of the Daleks”, questions of identity abound. First, there are Daleks who look human. And then there is a SPOILER who is SPOILER. And finally, there is the question of identity in the Doctor himself, as the end of the episode delivers on some of the promise from the end of last season, but I hope it’s not a full delivery on that “question”. 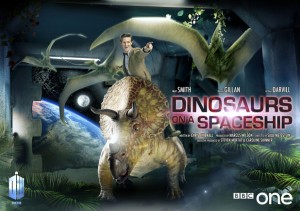 In “Dinosaurs on a Spaceship”, there this spaceship, see, and some dinosaurs. And it is just as fun as the title promises. (It also features voice cameos by Mitchell and Webb, two guys i only know about because Netflix knows I like British comedy.) It also has two robots who seem to have been lifted straight from a Douglas Adams novel, and whose final fate you will only understand if you have actually watched my top pre-Star Wars sci-fi movie. Oh, and there’s some fun banter and relationship stuff going on as well.

It was the relationship material that I was really drawn into with this episode. Not so much the flirting, and not really the marriage (Amy and Rory seem to be doing fine after last episode). Although, I did find Amy and the Doctor’s exchange to be touching, as he promises something to her and I found myself torn along with her. Is he telling the truth? He is an honest man. Usually. But he put such emphasis on it.

No, I really enjoyed Rory’s father. When he first showed up, I found myself actually feeling a little annoyed, thinking that they had better have him do something. That they better have a reason for him being there. And that it better not be “therapy in space” — he’s only there so he and Rory can have a big blow up and understand each other better at the end of things because they have gone through life and death together.

That’s not exactly what happens. What was nice was that they DID understand each other a little better, because they got to see each other in a new environment. Dad got to understand Rory’s life and calling, by seeing it in action. And Rory got to see his Dad throw the Doctor a few brilliant ideas. And Rory’s father’s character arc at the end of the episode, both parts of it, was touching and fun.

It was refreshing to see that relationship, and to see a positive father/son relationship. Not one that was broken and needed fixing, but one that was already pretty okay and was strengthened. That was the dynamic that caught me. I’ve thought about finding a way to spiritualize this, but I think it works best just to say this: this was a Father’s Day episode, and one that doesn’t try to make a grand, profound statement . . . it’s just fun.

There were other dynamics at work: the flirting between the feminism and the machismo was nice, because it acknowledged them both without discounting either of them. And the friendship and desperation that Amy and the Doctor share.

Can’t wait for next episode. It’s a Western.

You can read my review of some very DIFFERENT Doctors here.

2 responses to “WHO: Season 7 Off to a Running Start!”