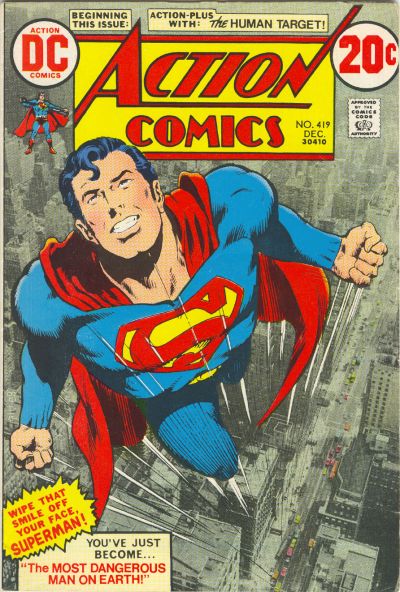 I’m not going to say too much about the covers that appear here. If I have some sort of historical tidbit to give, I may elaborate some. But often I’m just going to let the artwork speak for itself.

This is one of those times. You know who Superman is. You may not know who Neal Adams is, but he’s one of the all time greatest superstars of comic book artists.

Personally, what I love about this that here is Superman just enjoying flight, blasting upward. Of course, he is told to “wipe that smile off his face”, but for this image, out of context, it’s just a fun image to look at.

While searching for information about this cover (mostly to find out how old it was and who drew it — I already mentioned the artist, and it’s two years older than me, coming from 1972), I found someone who bought the original artwork on eBay. Here’s a link to that image, which gives insight into the way the artwork and the photo were merged. It’s old school photoshop: literally cut and paste!