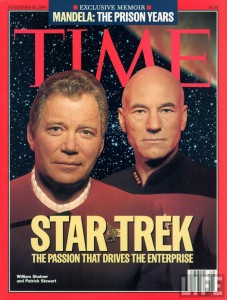 And for fans of science fiction, two different opinions.

This is part one of the conversation — we talk about the acting styles of Shatner and Stewart (and the others) and Kirk and Picard’s crews (and some of the others) and out favorite ships in Trek.

Next episode, we will talk about the captains themselves, and also about why we like these guys so much.

Dr. Jayce wrote an article, tipping his hand, about his dream Trek crew. Ben tipped his hand by having his caricature dressed in command gold, below.

So sit back, listen, and if you have anything you’d like to add to the conversation you can e-mail us at podcast (at) strangersandaliens.com. Or, if you are so inclined, you could read your comments and record it as an MP#. We’d love for you to join the conversation!

Also, check out the results of our Star Trek Captain poll . . .

And our review of the documentary CAPTAINS, which has William Shatner interviewing all the other captains from Trek.