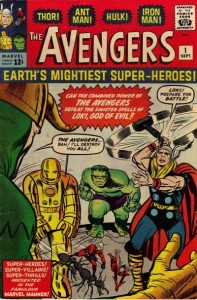 In the final installment of Avengers week, Steve, Dr. Jayce, and Ben assemble to talk about the movie that geeks the world over have been waiting for.

Well, was it all it could be? Better than it could be? Or did it crash and burn? Steve’s answer may surprise you. And Ben and Dr. Jayce argue over a nit-pick, because a nit-pick was all they could find to disagree about.

We’d like to know what you thought about The Avengers, too. Send us your feedback for next episode’s mailbag. Even better, e-mail an MP3 to podcast@strangersandaliens.com — please try to keep it around or under three minutes — and we’ll play it for everyone.

This podcast is the culmination of our “Avengers Week” here at the Strangers and Aliens blog. Check out these other Avengers features:

Dr. Jayce’s Biggest Avengers Disappointment (from BEFORE he saw the movie)

Cool Comic Covers (with some of the coolest imagery to feature these Avengers characters):
Iron Man
Hulk
Captain America
Thor

And finally, Ben’s series of reviews of the various Avengers movies, looking at them as single movies and also as part of an epic series . . . starting with Iron Man 1 and 2!