From Beyond the Unknown #23, DC Comics, by Nick Cardy

Comic book covers and gorillas go hand in paw. I don’t know why. I understand there are blogs devoted to the subject and perhaps some college papers or something as well. But there are many gorillas in the mist of comic book history, so don’t be surprised if they show up here, featured as a cool comic cover, because, frankly, while I don’t know the “why”, I do know that gorillas do, in fact, make comic book covers cooler.

Case in point: From Beyond the Unknown #23. Let’s break it down:

A – Library scene in a comic book: not cool.

B – Someone robbing a library at gunpoint: not cool (I mean, why rob a library in the first place? You can check books out FOR FREE!)

I don’t know how it works. Some sort of subconscious fear of the primal, naturalistic representation of our id?

Or, perhaps, it’s just the crazy thought that by reading Robinson Crusoe, Moby Dick, and Treasure Island will help a “man-ape” conquer the earth? (I really want to know how! i have all three of those books…) Besides, once it’s a GORILLA robbing the library, it all makes sense: whose going to give a gorilla a library card? He’s got to take extreme measures. 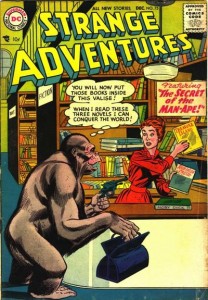 Note: This issue is actually a reprinting of another old comic, and the cover is a recreation of that old comic’s cover. It’s interesting to compare the two. Strange Adventures #75 is from the 50’s, while From Beyond the Unknown is from the 70’s. The newer cover has much more energy, while the 50’s cover feels static. The gorilla is far more threatening and the librarian is far more threatened in the 70’s, while the librarian from the 50’s seems mildly surprised that a gorilla has just strolled in. 70’s gorilla: “Hand over those other two books!” 50’s gorilla is almost a gentleman: “You will now put those books inside this valise.”