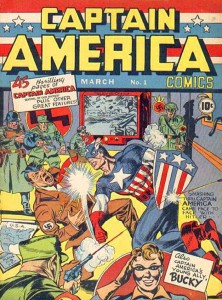 I wanted Captain America to be something different than the other 3 (or 4, if you include the Hulk) set-up movies for the Avengers. In Iron Man and Thor (and Hulk, who fits so well into the discussion that, if you don’t think he belongs in the discussion, just disregard…it’s either that or a lot more parenthetical statements) you have reluctant heroes; one who is born with powers that he doesn’t appreciate (some might say “abuse”), one who creates his own powers out of life-or-death necessity, and one who accidentally gives himself powers. Each either have innate or self-provided powers. Remember that point.

As a Christian, I sometimes have trouble with the overt or covert humanism in fantasy stories (a term I use to cover SF and superhero stuff as well). So many heroes find the power inside themselves to solve their problems. It can be argued that the powers in many of these movies are not the actual solution, but even conceding that argument, I find that many movies still resolve on the hero digging just a little deeper to find that they can pretty much do anything.

Let’s look now at Steve Rogers. He is an unfit specimen for combat. In fact, his being so sickly makes him unfit for many things, but he is relentless. He knows where he needs to be, and will attempt anything to try to get there. Yoda was wrong; sometimes there is a ‘try’ preceding the ‘do not’, and sometimes all of our attempts are thwarted despite out best efforts. So his power must come from outside himself.

In effect, the resolution of this story is a sort of ‘deus ex machina’. Without Stark’s machine turning Rogers into a super-soldier there would be no movie, but almost every other solution comes from outside, not inside. Nevertheless, Cap continues his relentlessness even after he has been augmented, showing that his goal has not shifted, just his focus on the next step in attaining that goal. The whole movie shows how Cap always tries to do the right thing concerning the goal (sometimes defining the right thing personally, like lying on enlistment forms, but his goal is always clear) and is forced to accept that things are out of his control, but he still remains undeterred. His enlistment attempts, facing the Red Skull, losing Bucky, piloting the crashing plane, and being thrust into his future all show his incredible grace under pressure, and illustrate the mindset of his sort-of catchphrase, “I could do this all day.”

I’m glad that they ditched any reluctance on his part. I don’t know how you could make a movie with a reluctant Captain America. That wouldn’t be Captain America, just like having a story where Superman has a child out of wedlock and doesn’t care for it like a father should would undermine the whole truth (not being true to the responsibilities that those actions might demand), justice (denying his child of a father, and perhaps the child’s mother of a husband is not very just) and the American way thing (even though American society seems to be trending that way, these things are not what America is all about). Oops…they made that one, didn’t they?

Okay…how about a Spiderman movie where he lets the guy who had been playing the role of the villain defeat the big bad guy, sidestepping the whole “…great power…great responsibility” thing? Wait…that was Spiderman 2, wasn’t it? Hmmm…how about Batman relying on the innate goodness of the citizenry of Gotham city not to kill some criminals to save themselves…nope…that’s Dark Knight. Wow. I really am glad they kept him true to his roots.

Diatribes aside, this article isn’t intended to knock the other lead-in movies, but I hope that in the Avenges movie they keep him steadfast, dogged and relentless. I’d also like to dig into the histories of the Black Widow and Hawkeye, as they seem more like Cap than the others, but hopefully it doesn’t set the precedent that if you have REAL powers then you are reluctant, but if your powers are simply heightened or maximized human powers, you’re going to be doing most of the actual work while the big reluctant babies perseverate over whether or not they are going to use the 1% of their power needed to assure that you don’t get killed. Oops…diatribe again…sorry.

What I liked the most about Captain America was that it illustrated the Christian mindset (I’m not arguing that it was intentional, just that it did it better than most other movies). We are supposed to persevere for what we know is right (but, of course, we go by God’s standard, not ours), knowing that the goal is what we are striving for, not perceived results. And, most importantly, that true power comes from outside of ourselves, and, in truth, we have no actual power, just that which God has blessed us with at any given time.