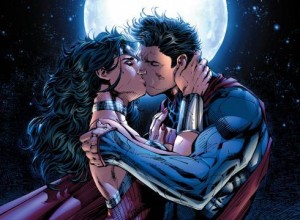 And HOW I know it is that the Internet told me.

What the Internet DIDN’T tell me, or you either, was that in the context of the story, it makes sense. It’s a logical (as logical as love can get) turn of events, considering the plot. It’s actually . . . good.

Justice League #12 is a good ending to a good story. But to me the appeal behind Justice League, as a comic, is that it is not the story . . . but the interplay between the characters. You know, like The Avengers movie.

The group dynamic makes the book, and when that falls apart I’ll stop reading it. Some might say the panel I used as the image for this post is the moment it fell apart. But just like Aquaman’s passive aggressive bid for leadership in light of Batman’s lack of people skills, and Flash’s levity compared to Green Lantern’s earnestness, and the many other relationship dynamics that make up a team, and not just a team, but a team of demigods, well, Superman and Wonder Woman turning to each other as the only other people in the world who could possibly relate to them makes sense.

However, it is interesting to note that I have read this story before. In a little book called Astro City.

“Dinner at Eight” tells the story of The Samaritan and Winged Victory, the world’s two greatest heroes, who try a little romance for the same reason Superman and Wonder Woman do. I won’t give away the ending, but I will say this: Astro City is far and away almost the best superhero comic series ever. I put it above Watchmen and Dark Knight Returns.

Anyway, for all the manufactured hubbub (I haven’t communicated with one person who actually was upset about this Superman and Wonder Woman thing), it’s a character moment in a character driven storyline that made perfect sense.

As for the storyline itself, it’s good. Not great. Not bad. Just good. It tries to look into what makes some of these heroes tick, and they have to face some awful things to win the day. Their battle in the first story arc just may have hurt someone who now wants revenge, and a spiritual evil uses that hurt to get him to help bring down the Justice League. It’s deeper than The Avengers movie, and if either of these two story arcs became a Justice League movie, it might not be bad.