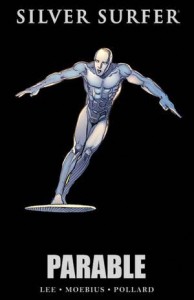 I wanted to follow up my last review for Spirit Blade with a review that was a bit more . . . positive. I thought about reviewing something by Geoff Johns that  actually liked, like the New 52 Aquaman or Justice League, both fantastic, but I’m going to save that for another day. (Closer to when the hardcover Aquaman graphic novel comes out. Yes, we live in a world where Aquaman is drawn by one of the best comic book art teams currently working, AND where an Aquaman graphic novel is getting a hard cover release.)

Looking at my shelf before I left for a conference, I saw this gem sitting there and thought I’d take it with me and re-read it. It features one of my favorite characters, Silver Surfer.

First, a bit about why I like the character. His story is tragic. He is trapped on earth, destined to protect our world even as he learns more about humanity and wonders if our world is actually worth protection. The love of his life lives back on his planet, but he can never be with her, a love doomed by eternal separation. His story is about compromise – choosing to save his beloved woman and his beloved world by working for Galactus, after making a deal with the devil, so to speak, in which he must find worlds for Galactus to consume and devour to feed his enormous appetite. Doing so, he is given immense power, to do almost anything . . . except return to his love. It is that power that he uses to protect our world.

And when Stan Lee writes the character, as he did for most of the first appearances of the character and in the Silver Surfer solo title, it can be Stan Lee at his best. He is able to cut loose with dialogue that is large and boisterous and grand and, yes, over the top. He is able to tell stories that drip with emotion and pathos. These are the stories Stan Lee used to explore the Human Condition (capital H, capital C). These are the stories he used to expose humanities dark side, and maybe expose some light, too. Maybe.

Bringing us to the graphic novel Parable. First, let’s look at the talent involved here. Stan Lee wrote the book, which actually has two stories from the late ‘80’s. One, Parable, features artwork by the late, legendary Moebius. The other, The Enslavers, features artwork by comic book luminary Keith Pollard. Both are about Silver Surfer, but the two stories are quite different, both exploiting Stan Lee’s audacious cosmic storytelling to two very different effects. These two stories are the best of Stan Lee and the worst. 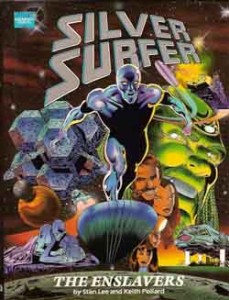 Parable is the stronger of the two, and the reason I bought the book in the first place. So let’s start with the weaker of the two: The Enslavers. This story establishes Silver Surfer as quite possibly the most powerful hero in Marvel’s universe, as he takes on a villain that not only threatens to destroy the world, but also defeats every Marvel hero on earth. In two pages. I’m not opposed to this . . . any story about a threat to the entire planet that takes place in a world filled with heroes, but wants to feature just one hero, HAS to explain away why no one else is around. This is a hurdle Iron Man 3 will have to overcome, and it sounds like it might even be the main theme there. And how many times in Star Trek has the Enterprise been the only starship close enough to help? So it had to happen, but unfortunately that’s only he first bit of convoluted plotting. As can often happen in Stan Lee stories, events occur with little connection to the plot, or to move the plot forward in awkward, almost goofy, ways. But the climax is, in best Stan Lee tradition, a big climax that is meant to be about the triumph of the human spirit. I think. But the artwork by Keith Pollard, I have to say, is spectacularly cosmic, even when the story veers toward the ludicrous. 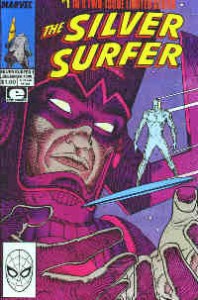 Parable, however, is the reason I bought the book. I was very curious about this team up between Moebius and Stan Lee. If you don’t know who Moebius is, you’ve seen his work, in Alien and The Fifth Element and Tron and The Abyss and even Space Jam! He is one of those artists with an unmistakable style. Teaming up with Stan Lee, someone else with an unmistakable style, would make this team up as legendary as the first meeting between Superman and Spider-man!

The story: Galactus returns to earth, even though he vowed never to attempt to destroy our world. And he always keeps his vows. His plan, just find a spot on the earth and stand there, just letting his sheer presence cause us to self-destruct. We’ll do the work for him, as religions and politics and societies tear apart at the seams around him. That, or we’ll end up just bowing to him.

Of course, Silver Surfer will have none of that. There are no other superheroes in this story, taking place apparently on an Earth without the Fantastic Four or Thor or the Avengers. It’s just Silver Surfer against the godlike being who gave him his power. Silver Surfer is outmatched, but that’s not going to stop him.

The art in this story is ethereal and smooth and classic Moebius, and carries the story’s big themes in an interesting way. This is not an American superhero comic and, back in ’89 or so, when it first appeared, it may have been more of a jarring feeling for readers. But artistic exposure for modern readers, while not lessening the power of the art, does render it less . . . weird. In this hardcover version, there are also a number of features looking back at how the two stories came together. Moebius himself gives a tour of the entire process, which I found to be quite interesting. 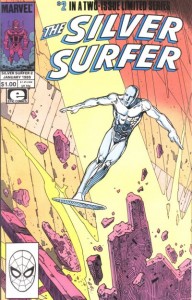 Averaging the two stories, I recommend Silver Surfer Parable. Somehow, even though these two stories are very similar and came from the same writer’s brain, and even have similar premises on a surface level, Parable has a more solid story and a stronger thematic throughline. The Enslavers’ awkward themes of love and dominance and “if you can’t be with the one you love, love the one you’re with” and . . . well, thematically, it’s just all over the place . . . don’t give a lot to think about.

On the other hand, Parable, as a parable, seems to be about being careful what you give your heart to. It has an interesting, if clichéd, subplot. It’s the classic “televangelist who probably doesn’t actually believe what he teaches who just loves power” type of character who, when Galactus shows up, decides this is the new thing and builds a religion around Galactus, and the people’s hearts follow. This can only go one of two ways: either he will die because he has turned the people’s hearts toward an evil, or he might live, might die, because he turns his own heart away from an evil. Okay, that’s three ways this guy could end. Well, I was slightly surprised what happened there.

Second, I do not want to give away the ending, but it was an interesting turnabout. The people have come to believe the all powerful Galactus is god and are following him with fervor. But when he, inevitably, is defeated . . . the action continued after the climax in a way I was not expecting. It’s over the top, and where the climax has a very humanistic triumph, the denouement is one of those big, ridiculous shafts of light Stan Lee likes to shine on the dark underbelly of humanity. It could be said that the theme of the book is a mash up of two truisms . . . “One man really can make a change, BUT the more things change, the more they remain the same.” The ending has implications for religion and politics, both American parties and worldwide, and economics.

It is completely unrealistic . . . and totally believable at the same time.

Parable is available as a hardcover graphic novel, but is also available on Comixology.