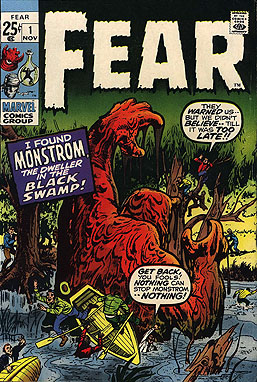 I don’t know why I love swamp monsters. It has something to do with the primal idea of the very earth or soil coming alive beneath you, perhaps. Or the idea of “ashes to ashes, muck to muck”? Or maybe as horror stories go, generally speaking it’s gross, without being gory.

Regardless, swamp monsters are one horror trope that I gravitate to.

Anyway, i discovered this after a publisher asked me to write a story about a character named “Monstrom”. Now, the character called “Monstrom” has nothing to do with swamp monsters, and I doubt that the publisher had even heard of this obscure Marvel comic. But I was delighted to find it!

Drawn by Jack Kirby, he also drew the seven page short story featuring “Monstrom”. If collectibles like this weren’t so pricey (this issue runs about $70, from what I’ve found) I’d have this in my collection. It’s a great example of swamp monster-ness!